More from this unit:

In the past decades modern drug development has relied on the generation of enormous collections of small molecules. These millions of compounds are tested in the smallest possible scale. This approach is often limited by economic and physical factors and the expected success can usually only be reached after years of intense work.

The structural diversity of larger peptides, proteins and antibodies is orders of magnitude larger than the traditional drug compounds. It is impossible to generate all possible variants of these molecules with traditional chemical approaches. But with modern synthetic methods we can create complex gene mixtures, which are introduced in a special way into bacteriophage (virus of bacteria). Each bacteriophage then carries a gene coding for an individual peptide/protein variant and the gene product is displayed as one or multiple copies on the surface of the bacteriophage particle, hence the method’s name phage display. It is no problem to generate gene mixtures of billions of variants. It requires some larger effort to generate the corresponding bacteriophage mixtures by cloning the DNA, without losing the original complexity. Finally one milliliter can contain several billion variants of these bacteriophage. By binding to a target molecule individual phage can be fished from the original mixture, reamplified by growth in bacteria and enriched by repeating this step several times. It resembles the work of a gold-digger separating gold particles from the other stones and sand, and he would probably be glad to amplify the nuggets. Still, this comparison gave the name “panning” to the selection procedure in phage display.

The disadvantage of these libraries is still that they cover only a very tiny portion of all possible variants of a peptide. Ten amino acids, i.e. the size of small peptide hormones, give 2010 variants. These are 1013 possible sequences, which for practical and theoretical reasons cannot covered by a standard peptide phage library. We are therefore applying new methods:

In the evolution the fastest way to new proteins has been the recombination of genes and not random changes by individual mutations. This was already recognized many years ago by many researchers. Scientists like W.P.C. Stemmer (earlier at Affimax Inc.) introduced more or less directed methods for gene recombination. A procedure for the directed recombination of peptide genes was developed by Prof. John Collins and further developed at Cosmix GmbH (Brunswick. Germany) by Dr. Szardenings and colleagues to create methods also feasible for antibodies and proteins. These libraries do not only allow the generation of unusually large starting libraries (peptide libraries with > 1010 sequences) but also the exploration of a sequence space beyond 1015 sequences by incremental recombination. This allows at least theoretically to identify any variant of a peptide with 10 amino acids. Practical results indeed show homologies of 9–10 amino acid positions within selected binders.

Recombining antibody gene libraries requires special expression vectors and designated gene fragment cloning. We can use these methods for cDNA libraries as well as for naïve human Fab libraries with methods developed in Braunschweig earlier.

At Fraunhofer IZI we are turning decades of experience in the handling of peptide libraries into new tools and novel types of libraries. Phagemid vectors have been further optimized for cloning gene fragments and they allow further improvement in the selection efficacy. We have access to the best available DNA synthesis technologies of our partners and have abolished sequence bias and reduced sequence variability through intelligent design. These libraries are able to solve problems, which have not been tackled successfully by this technology.

This rapid routine work is very helpful in the early stages of antibody development as well as for the precise understanding of the spectrum of peptides bound by the individual antibody.

All in all, the Fraunhofer IZI has excellent basic equipment that is employed in the highly diverse projects of this unit. The following devices are of particular significance for the Ligand Development Unit: 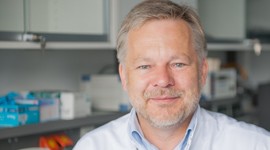