Fraunhofer Prize for “Human- and Environment-Centered Technology” 2021 for a vaccine production process that is faster, more efficient and more environmentally friendly

Vaccines are currently a great source of hope for many people, as it is believed they will help to protect society against COVID-19 and pave the way back to a normal life. The current focus is clearly on coronavirus — but vaccines are also fundamental to combating other pathogens. A team of researchers from three Fraunhofer Institutes has now developed a method of producing vaccines that is faster, more efficient and more environmentally friendly than the conventional production process — and their efforts have earned them the Fraunhofer Prize for “Human- and Environment-Centered Technology”. The award ceremony took place during the annual conference of the Fraunhofer-Gesellschaft on May 5, 2021.

The methods available to produce vaccines have been known for decades. But a new production process for inactivated vaccines is set to make vaccine production faster, more environmentally friendly and more efficient than ever before while also reducing costs. Dr. Sebastian Ulbert and Dr. Jasmin Fertey from the Fraunhofer Institute for Cell Therapy and Immunology IZI in Leipzig, Frank-Holm Rögner from the Fraunhofer Institute for Organic Electronics, Electron Beam and Plasma Technology FEP in Dresden, and Martin Thoma from the Fraunhofer Institute for Manufacturing Engineering and Automation IPA in Stuttgart have been awarded the 2021 Fraunhofer Prize for “Human- and Environment-Centered Technology” on behalf of their teams. The jury emphasized “the simple and efficient method for largely retaining the structures that are important to the efficacy of the vaccine and the complete avoidance of chemical additives that would otherwise be necessary.”

How accelerated electrons can replace chemicals: killing a virus in milliseconds

Until now, the production of inactivated vaccines has always been based on chemicals. The pathogens are stored with toxic chemicals, particularly formaldehyde, until the genetic information of the virus is completely destroyed and it can no longer propagate. This process is known as inactivation. But it is problematic in many ways: The chemicals also destroy part of the external structures that the immune system needs to form antibodies. In addition, industrial-scale vaccine production involves large quantities of toxic chemicals, which represent an environmental pollutant and pose a challenge for occupational safety. And what’s more, depending on the virus, it may take weeks or even months for the virus to actually be “killed.”

The new approach developed by a team of Fraunhofer experts has none of these drawbacks. “Instead of inactivating the virus with toxic chemicals, we fire electrons at it,” explains Ulbert. “The viral particle almost completely intact. There are no chemicals that we need to dispose of and the entire process takes just a few seconds.” There was one hurdle that needed to be overcome: The electrons can only penetrate liquids to a depth of a few hundred micrometers, and they lose more and more energy in the process. If viruses circulating in the liquid are to be reliably killed by the electrons, the liquid film must be no thicker than around 100 micrometers — and it must be transported evenly, too. “This required complex equipment technology, which is why we brought Fraunhofer IPA on board,” says Rögner.

The road to an industrial application

At Fraunhofer IPA, Martin Thoma developed two ways to overcome the problem. “The pouch module is suitable for conducting preliminary tests that provide useful information, while the tumbler module is beneficial for larger quantities,” says the physics graduate. On the basis of this setup, Fertey investigated viruses such as influenza, Zika and herpes as well as numerous bacteria and parasites, which were treated with electrons subject to targeted acceleration via the pouch and tumbler module. “We were able to successfully and reliably inactivate all classes of pathogens,” says the delighted biologist.

A prototype was completed in 2018 and put into operation at Fraunhofer IZI before undergoing further development. The next year, the team of researchers obtained a licensing partner and secured licensing revenue of nearly a million euros on the basis of contractual agreements. The production modules — which are the size of a refrigerator — could be integrated into pharmaceutical production in around five to seven years in order to produce vaccines in a quick, efficient and environmentally friendly process.

The “Human- and Environment-Centered Technology” prize — which is presented by the Fraunhofer-Gesellschaft and the former Executive Board Members and Institute Directors of the Fraunhofer-Gesellschaft together with the Fraunhofer Excellence Foundation — is awarded every two years for achievements in the field of research and development that make a crucial contribution to improving quality of life for people, maintaining their capacities in daily life and into old age and ensuring a healthier environment. The prize is worth 50,000 euros.

Research News of the Fraunhofer-Gesellschaft May 5, 2021

Head of Department of Vaccines and Infection Models 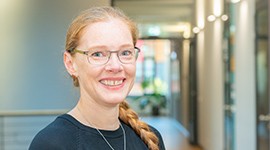