Pathogen of Q fever detected in the feces of ticks

Researchers from the Fraunhofer Institute for Cell Therapy and Immunology IZI were able to prove that ticks transmit the Q fever pathogen. Tick feces, which contain high concentrations of the bacteria, play a particularly important role in this process.

Q fever is a reportable disease in the EU. It is a zoonosis, a disease transmissible from animals to humans, caused by the bacterium Coxiella burnetii, which for instance infects cattle, sheep and goats. Veterinarians and animal owners in particular have an increased risk of infection. About half of the infected people show flu-like symptoms that can be complicated by inflammation of the lungs, liver, heart muscle or brain. Chronic courses of the disease, mainly heart valve inflammation, are rare but feared because of their severity.

The Robert Koch Institute lists a total of 93 Q fever cases in Germany in its Infectious Epidemiology Yearbook for 2018, and 794 cases have been reported as confirmed throughout Europe according to the »Q fever - Annual Epidemiological Report« published by the European Centre for Disease Prevention and Control.  The total number of cases is therefore not very high. However, about 100 people have died alone in the Netherlands in the last ten years as a result of Q fever, although the disease can be successfully treated with antibiotics, explains Dr. Gustavo R. Makert dos Santos, who headed the studies in the working group of PD Dr. Ulbert (Vaccine Technologies) at Fraunhofer IZI. In his view, the biggest problem is that doctors of human medicine often know far too little about Q fever, and therefore do not diagnose the disease accordingly. This was one of the reasons for setting up the interdisciplinary consortium Q-GAPS (www.q-gaps.de), which is funded by the German Federal Ministry of Education and Research. The Fraunhofer IZI is involved in this consortium in order to clarify unresolved questions in connection with Coxiella burnetii in a joint effort between doctors of human and veterinary medicine.

One of these unresolved issues concerned transmission by ticks. Until now, there has been disagreement in scientific circles as to whether ticks play a role as vectors that carry the disease. Studies at Fraunhofer IZI have now shown that ticks do act as vectors. And the team around Dr. Gustavo R. Makert dos Santos has found out something else, too: the ticks ingest the bacterium when they bite infected cattle, sheep or goats, and nine days later Coxiella burnetii is detectable in the tick feces for at least seven weeks.

The scientists gained evidence for this process by using an in vitro feeding system specially developed at Fraunhofer IZI. The ticks were kept in this system and fed with infected blood. It was also discovered that nymphs – the second developmental stage of a tick after the larva – that were fed with infected blood also transmitted the bacterium to the adult tick even after they had molted. The researchers then found, after a new blood meal (also on non-infected blood), Coxiella burnetii in the feces of the ticks, but not in the pathogen-free blood ingested by the ticks. This indicates that Coxiella burnetii is transmitted less through the tick's bite than through its feces, e.g. by inhalation.

Considering the changing climate and resulting further spread of ticks, Makert dos Santos describes the situation as follows:  »Globalization is causing more and faster spread of pathogens around the world. But since the vectors were often missing in the past, they could not establish themselves. As soon as vectors such as ticks and mosquitoes continue to spread, the risk of contracting pathogens such as Coxiella burnetii will increase. « A better knowledge of Q fever by doctors of human medicine is therefore crucial for the diagnosis and treatment of this disease.

The article »Uptake and fecal excretion of Coxiella burnetii by Ixodes ricinus and Dermacentor marginatus ticks« published in the journal Parasites Vectors summarizes the results of the study (doi: 10.1186/s13071-020-3956-z). 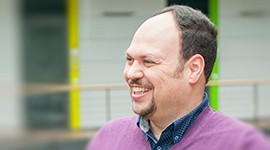