A project team from the Fraunhofer Institute for Cell Therapy and Immunology IZI and Lipocalyx GmbH (today: BioNTech Delivery Technologies GmbH) has now been able to prove that viromers are a suitable carrier material for messenger RNA (mRNA). In studies, the viromers developed by Lipocalyx proved to be a suitable therapeutic option for mRNA delivery in the treatment of a model for inflammatory diseases. The results were published in "Scientific Reports", an open access journal of the Nature Publishing Group.

Researchers from the Germany-based Fraunhofer IZI and BioNTech were able to demonstrate in cell cultures and mice that disease-relevant inflammation mediators can be influenced by the introduction of mRNA molecules. The focus was on the use of viromers as carrier system. Viromers are modified polymers that mimic the cellular uptake pathway of influenza viruses and thus ensure a silent (unnoticed) but efficient entry into the cell. RNA molecules and viromers form nanoparticles in the size range of 200-300 nm and package the nucleic acids inside them. The research project was supported by the German state of Saxony-Anhalt with funds from the European Regional Development Fund (ERDF).

With the help of this carrier system, mRNAs, i.e. protein-coding nucleic acids, can be introduced into target cells, which then serve as a template for the production of corresponding target proteins. Free nucleic acids are usually not taken up by cells and are exposed to enzymes (nucleases) in biological fluids, which rapidly degrade them. Molecular carrier systems are therefore required for stabilization, to guide the nucleic acids to their site of action, introduce them into the target cells and then release them.

"In our studies, viromers have proven to be a suitable carrier system. With their help, we’ve managed to introduce mRNA molecules, which are currently used as protein drugs, e.g. in the treatment of rheumatoid arthritis, into cells. Such mRNA molecules are much easier and more precise to characterize than a protein drug and would therefore be cheaper to produce in the future. They serve as template and then facilitate the production of the corresponding proteins in the target cells. The idea behind this is to use humans themselves as a factory for producing therapeutic proteins in the future," explains project coordinator Dr. Holger Cynis, who heads the Molecular Biotechnology unit at the Fraunhofer IZI.

With the identification of viromers as a suitable carrier system, the foundation has been laid for the further development of viromers together with inflammation-regulating nucleic acids into a gene therapy. The research results were published in "Scientific Reports" on September 15, 2020: 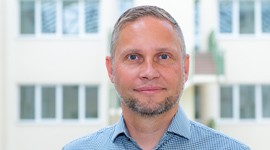