Together with colleagues from Monash University (Melbourne, Australia) and other institutions, Fraunhofer IZI researchers have elucidated the helical ultrastructure of the metalloprotease Meprin alpha. The results have now been published in the journal Nature Communications.

Proteases are enzymes that catalyze the specific cleavage or degradation of proteins.

The protease Meprin alpha is predominantly expressed in kidney and intestinal cells and plays a key role in immunological and inflammatory processes.

This function makes the enzyme a promising target for therapeutic approaches, for example in acute kidney disease, fibrosis and inflammatory bowel disease.

As part of an international collaboration, the molecular structure of the protein has now been elucidated at ultrahigh resolution.

Researchers at the Fraunhofer IZI (Department of Molecular Drug Biochemistry and Therapy Development, Halle (Saale), Germany) prepared and purified the molecule to be studied. The protein was then characterized in terms of its biophysical and enzymatic properties.

Together with colleagues from Monash University, the protein was examined using cryoelectron microscopy. For this purpose, the molecules had to be fixed in amorphous ice at temperatures of -150°C. The images taken with a powerful electron microscope from the Ramaciotti Center revealed amazing things. The protein's individual molecules are arranged as a flexible left-handed helix. Such a property has never been described before for any other protein. Evaluation of the data obtained by computer analysis eventually led to a three-dimensional model of the enzyme. The information obtained is being used at the Fraunhofer IZI to develop even more precisely fitting inhibitors of the protease, which can be applied as drugs of, for example, acute or chronic kidney inflammation. 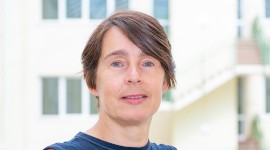