Technology for health monitoring of dairy cows successfully licensed out

A test system has been developed at Fraunhofer IZI to assess the health of dairy cows and identify sick animals in the herd at an early stage based on immunological biomarkers in the milk. With the company NovaTec Immundiagnostica GmbH, an industry partner has now been found that will market the test from fall 2019.

With over four million dairy cows, Germany is the largest producer of cow’s milk within the EU. Milk production is therefore not only essential for our diet, but also for the economy.

The health of the livestock closely correlates with the milk yield of the cattle. Infections and inflammations have a negative impact on animal welfare and milk production. Being able to identify diseases early on helps to reduce production losses and also the use of veterinary drugs.

In order to continuously monitor even large animal populations without spending an excessive amount of time or money on testing, intelligent screening tests are needed that can analyze larger sample quantities simply and efficiently. Precisely this type of test has been under development at Fraunhofer IZI since 2010 and is now about to be released onto the market.

After carrying out extensive transcriptome and proteome analyses, eight biomarker candidates were first identified and validated that indicate not only bovine mastitis but also systemic inflammatory reactions. Two biomarkers proved to be particularly promising here with regard to sensitivity and specificity: haptoglobin and the polymeric immunoglobulin receptor. A series of monoclonal antibodies were developed and tested against both proteins which, in turn, form the basis for developing immunological detection procedures (ELISA). These can be used to identify and quantify the respective markers in the milk and also the blood. The haptoglobin ELISA was first developed at Fraunhofer IZI before being investigated as to its applicability in the field in numerous validation studies over the past three years together with partners from the Faculty of Veterinary Medicine at Leipzig University and the Thuringian Animal Diseases Fund. Here the test was found to be reliable, selective and sufficiently sensitive in recording the health of dairy cows. From a large herd, individual sick animals can be picked out to then undergo additional veterinary examinations and treatment, sometimes even before any symptoms have emerged. The health of the livestock can therefore be monitored and acute inflammations or the spread of infection prevented.

After joint development efforts to bring the prototype to market maturity together, the test for identifying haptoglobin in cattle was licensed out to the company NovaTec Immundiagnostica GmbH, based in Dietzenbach, at the start of 2019. It is expected to be launched as a test system for high-throughput screening in veterinary diagnostic laboratories in fall 2019. 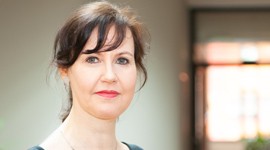